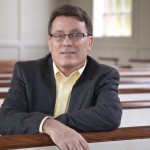 Dr. Franklin’s faculty duties include facilitating the “Hands-On Ouachita” study abroad program and co-leading bi-annual mission study trips for OBU students. His travels have taken him to over twelve countries across four continents.

Dr. Franklin and his wife, Ardith, have been married since 1976. They have three children, Ariane, Angela, and Reece. Ariane is married to Daniel Raines. They have one son, Kayson, and one daughter, Annalee. Reece is married to the former Anna Grace Poole.

Before coming to Arkansas, Dr. Franklin and his wife served for twenty-three years as Southern Baptist missionaries to Japan. During that time they completed two years of Japanese language study, engaged in four church starts, and served on the Strategy Leadership Team of the Japan Baptist Mission.

Dr. Franklin is active in the community, serving as the preaching pastor on the Twin Rivers Nursing Facility worship team (First Baptist, Arkadelphia). In April 2012 he was called to Mt. Zion Baptist Church in Arkadelphia as bi-vocational pastor. He also chairs the Reach Our World outreach team for the Red River Baptist Association. From October 16, 2012 to February 28 2013 he hosted "The Bible Says" Radio Broadcast Series on KYXK 106.9, Arkadelphia, AR.

“De-ta kara Purojekuto he” (From Data to Project), in Eriya no Yo ni (Like Elijah), Elijah Group Publishing Committee, Shinza, Japan: 2009.

“Bijon to Hataraki no Shushi” (The Connection between Vision and Action ), in Eriya no Yo ni (Like Elijah), Elijah Group Publishing Committee, Shinza, Japan: 2009.