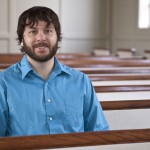 “In Defense of Rationalism against Skepticism,” Indiana Philosophical Association Conference, November 2005, Franklin, IN.

I’m a husband, dad, and philosopher. I have a wonderful wife and four fantastic kids, the oldest are girls and the youngest are boys. They are a lot of fun. I like to play about any sport and am an avid Steelers and Ohio State Buckeye fan. (How do I justify this? I grew up in Ohio but also close to Pittsburgh).

Before college, I was in the 82nd Airborne Division. I had my wisdom teeth pulled somewhere around 1995. I’ve only had one cavity in my life even though I rarely floss and didn’t go to the dentist for seven years during graduate school. If I had many lives, in 3 of them I'd be an architect, a helicopter pilot, and a general housing contractor (but not all at once unless in those lives I lived to be about 300 years old).

I think my favorite smell is wood burning in the fall. I like wood. It's a really nice material. Speaking of wood, one of my favorite childhood memories is the memory of going out early on Saturday mornings (before football began) and cutting and hauling firewood with my dad, uncle, and brothers. My least favorite type of lift: bent over rows. One of my most annoying habits: pulling my beard (I know, but I just don't care. Twisting beard hair is a wonderful feeling. Deal with it).

My favorite sound: my kids laughing when they’re being tickled.