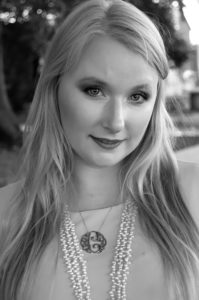 Catherine Grace Durbin, New Orleans born and Mississippi native, received her bachelors in music from the University of Southern Mississippi and her masters in music at the University of Memphis. She is a lifelong chorister in the Episcopal church and began her life on stage at the age of thirteen. She has studied and performed musical theatre, opera, oratorios and contemporary concert pieces. She has experience working backstage as a stage manager, directing choirs of all sizes, and has a particular fondness for vocal pedagogy. She has studied and performed through the Southeast, including the Natchez Festival of Music where she worked backstage, translated and operated supertitles for Don Giovanni and Rigoletto, and sang in a variety of recitals. In Austen, Durbin performed as a National Finalist for the Classical Singer Vocal Competition. During her tenure in Memphis she understudied Despina, performed Susanna, participated in OperaMemphis’ opera choruses and festival scenes, as well as put on numerous concerts and recitals. Through her position as soprano section leader and soloist for Rhodes’ MasterSingers, she honed her love for oratorios while teaching, covering and performing Bach, Patterson, Rossini, and Verdi . Her time with the International Vocal Arts Institute took her to both Virginia and Montreal, allowing her to studied both Mozart and Verdi roles under the prestigious Joan Dornemann and Mignon Dunn. Durbin currently resides in Little Rock, Arkansas with her husband and infant son.