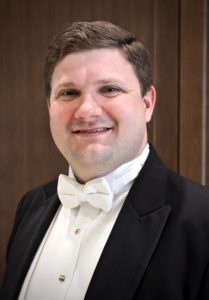 Director of Choral Activities and Instructor of Music

Joshua R. Brown serves as the Director of Choral Activities and Instructor of Music at Ouachita Baptist University where he teaches choir, conducting, choral methods, voice, and serves as the Opera Music Director. Prior to his appointment, Mr. Brown served as the Director of the University of North Texas Men’s Chorus while pursuing a Doctor of Musical Arts degree in Choral Conducting with a related field in Vocal Pedagogy. He also served as Artistic Director of the Coppell Community Chorale (2016-2019) and was Director of Choirs at Coppell High School (2012-2017) where his choirs were selected to perform at the White House (2014), Texas Music Educators Convention (2017), and Southwestern American Choral Directors Convention (2016). Previously, Mr. Brown was Director of Choirs at Abilene High School (2009-2012). He has also served as an officer or committee member in Texas Music Education Association (TMEA) Regions 16, 20 and 31, and is regularly called upon to serve as a choral adjudicator, clinician, or accompanist.

Mr. Brown holds a Bachelor of Church Music degree from Dallas Baptist University and a Master of Music degree in Choral Conducting from Baylor University. While at Baylor, Mr. Brown was the graduate conductor of the Baylor A Cappella Choir and Chamber Singers. In 2007, Mr. Brown was selected as one of eight National Graduate Semifinalists in the Choral Conducting Competition of the American Choral Directors Association. He has studied conducting with Anton Armstrong, Jeffery Ames, Donald Bailey, Stephen Heyde, Allen Hightower, Stephen Holcomb, Eric Wilson, and voice with Susan Wyatt. His professional affiliations include ARACDA, ACDA, TMAA, TMEA, TCDA, NCCO, and Chorus America. Mr. Brown and his wife, Hillary, look forward to welcoming their first daughter in May of 2019.