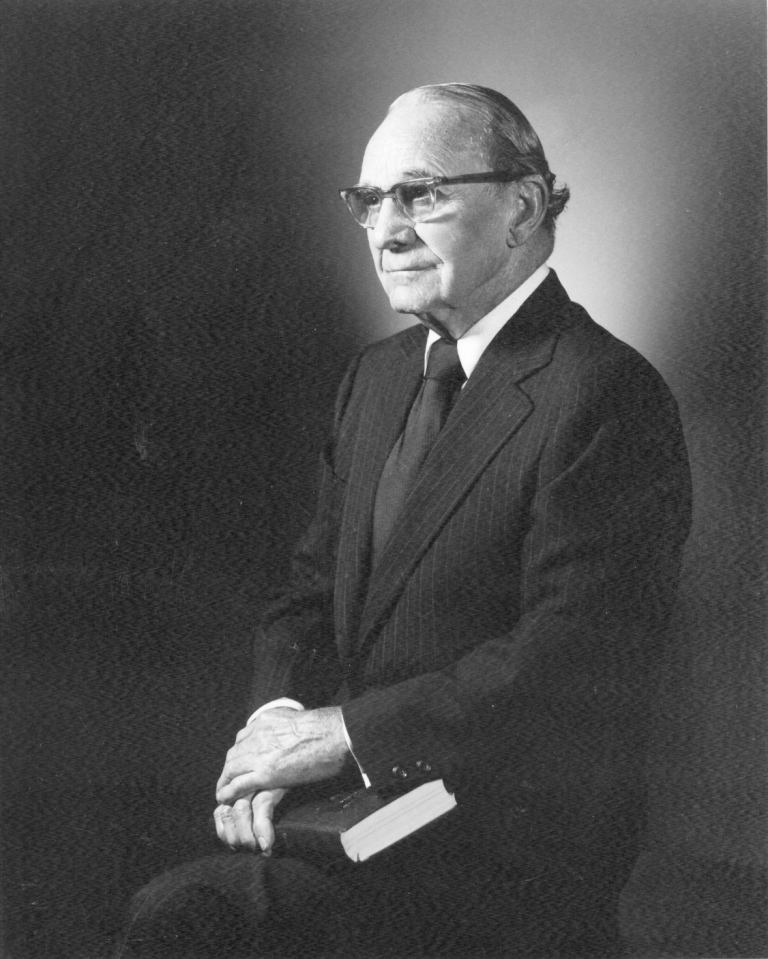 Senator John L. McClellan announced in June of 1976 that Ouachita Baptist University would be the repository for his official papers and memorabilia. Today, Senator McClellan's papers are housed in OBU's Riley-Hickingbotham Library. Over 1,200 linear feet of files form the foundation of the collection. The scrapbooks within the collection date from 1922, when McClellan ran for local office in Malvern.

There are a variety of photographs covering all aspects of his life and career as well as government documents and books from his personal library. The collection also includes a number of audio and video recordings.

McClellan Hall, the building that houses key artifacts from the senator's life and career, was officially dedicated on April 4, 1978. In the building's rotunda, plaques, awards, memorabilia, and photographs highlight the four phases of Senator McClellan's career: "McClellan the Builder," "McClellan the Investigator," "McClellan the Legislator," and "McClellan the Man." A re-creation of his office serves as the centerpiece of the exhibit and contains his office desk and chair, his chair from the Senate Chamber, an oil painting of his wife, a large stuffed owl from his owl collection, and many other items.

John Little McClellan was born on February 25, 1896, on a farm near Sheridan, Arkansas, the son of Isaac S. and Belle Suddeth McClellan. The McClellans were staunch Democrats and named their son for Congressman John Little.

Educated in public schools, young John became interested in law and studied in his father’s law office when not busy on the family’s farm. He was admitted to the Arkansas Bar in 1913 at the age of seventeen, becoming the youngest lawyer in the United States. That same year, he married Eula Hicks of Sheridan and practiced law with his father in Grant County. In August 1917, John L. McClellan joined the U.S. Army and served as a First Lieutenant in the Aviation Section of the Signal Corps. He opened a law office in Malvern following his February 1919 discharge and a divorce from his wife.

McClellan’s long political career began in 1920 when he was chosen City Attorney of Malvern, a post he held until 1926. During this time he married Lucille Smith of Malvern. At age thirty, he was elected Prosecuting Attorney for the Seventh Judicial District of Arkansas. Elected to Congress in 1934, he served two terms (1935-1938) in the U.S. House of Representatives from the Sixth Congressional District of Arkansas. Lucille McClellan died suddenly in 1935, and Congressman McClellan married the former Norma Myers Cheatham in 1937.

In 1938, McClellan unsuccessfully challenged Arkansas senator Hattie Caraway for her seat, losing a close Democratic primary. He resumed the practice of law in Camden, and then ran for Arkansas’s other Senate seat in 1942, which he won easily. McClellan was reelected in 1948, 1954, 1960, 1966, and 1972, serving until his death in 1977. He represented the people of Arkansas in that capacity longer than anyone in the state’s history. McClellan earned the most prestigious committee rank ever attained by an Arkansan in the Senate, that of Chair of the Committee on Appropriations.

John L. McClellan advanced to prominent positions of leadership in the Senate, enabling him to render outstanding service to the people of Arkansas and the nation. The McClellan-Kerr Arkansas River Navigation System is a prime example of his leadership in providing opportunity and progress in Arkansas and the Southwest. Numerous dams, lakes, drainage and flood control projects, wildlife habitats, forest preserves, and recreational facilities bear his stamp of endeavor.

John L. McClellan served for twenty-two years as Chairman of the Committee on Government Operations. He served as Chairman of the Senate Permanent Subcommittee on Investigations for eighteen years (1955-1973), and no other chairman of a congressional investigating committee in the history of the United States Congress has approached McClellan’s record of tenure as chairman, for either the number of investigations conducted or the results achieved. As Chair of that Subcommittee and two other investigative committees–the Senate Committee on Improper Activities in the Labor or Management Field and the Special Committee to Investigate Political Activities, Lobbying and Campaign Contributions–he conducted more congressional investigations than any other member.

The Senator first emerged as a national figure during the Army-McCarthy hearings of 1954. McClellan led a Democratic walkout of the Republican-controlled subcommittee because of objections to Senator Joseph McCarthy’s witch hunting conduct. In 1955, Senator McClellan assumed chairmanship of that committee and hired Robert F. Kennedy as chief counsel.

Under Senator McClellan’s leadership, some of the most well-known and significant investigations in the nation’s history were conducted–probes into widespread corruption and criminal activities in the labor-management field; organized crime; the TFX aircraft contract; profiteering in defense contracts for missile procurement; and the riots that erupted in cities and college campuses in the late 1960s. Probes into the activities of teamsters Dave Beck and Jimmy Hoffa, the so-called “Valachi hearings,” and investigations surrounding the affairs of Texas financier Billie Sol Estes, all catapulted McClellan into the public eye. As a vigorous, relentless, and effective investigator, John L. McClellan won a reputation for judicial impartiality and fairness which brought him respect of his colleagues and the American people.

As a member of both the first and second Hoover Commissions, the Senator authored many of its recommendations to reorganize the federal government, resulting in savings of hundreds of millions of dollars to taxpayers. Prominent among these was his sponsorship of legislation which created the General Services Administration, the business arm of the federal government. He was also the coauthor of the bill which in 1976 resulted in the first complete revision of the U.S. copyright laws since 1909.

A leading advocate of law enforcement, Senator McClellan was a key figure in winning Congressional approval for many significant laws and programs. Among them were the landmark Omnibus Crime Control and Safe Streets Acts of 1968 and 1970, and the Organized Crime Control Act of 1970. In his thirty-five years as a Senator, John L. McClellan introduced over 1,000 bills; 140 were signed into law.

For many years, Senator McClellan, Senator J.W. Fulbright, and Representative Wilbur D. Mills, gave Arkansas one of the nation’s most powerful Congressional delegations.

Paralleling the senator’s successful political career was a series of tragic deaths within his family. After losing his second wife to spinal meningitis in 1935, his three sons died within a relatively short period of time: Max died of spinal meningitis in Africa in 1943, while serving in World War II; John L., Jr., died in 1949 from injuries received in an automobile accident; and James H. “Jimmy” died in a plane crash in 1958. John L. McClellan also had two daughters, Doris and Mary Alice.

John L. McClellan died November 28, 1977, in Little Rock, and is buried in Roselawn Memorial Park. At the time of his death, he ranked second in seniority in the U.S. Senate and was one of its most powerful members.


To search for John McClellan materials in other archives, consult ArchiveGrid.

Senator John L. McClellan had the distinction of serving Arkansas over the course of eight presidencies. The McClellan collection includes personally signed letters from each president.